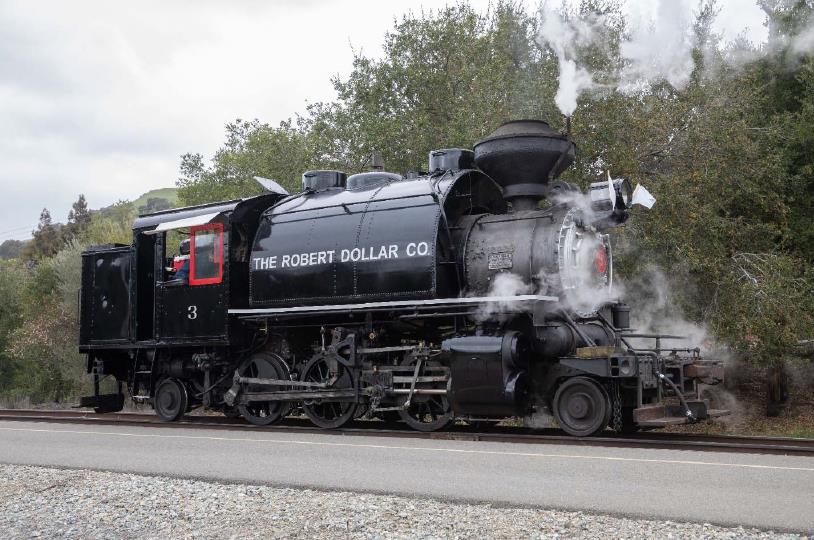 The Robert Dollar Co. 3 has run‐around its train and is preparing to travel

Alna, Maine
13. March, 2021: The Wiscasset, Waterville & Farmington Railway Museum (WW&F) Board of Directors approved the plan to build a replica of the Wiscasset 3‐stall roundhouse just north of the turntable at Sheepscot Station, Alna, Maine. The roundhouse will feature a run‐through track as the Wiscasset structure had in later years. The new roundhouse will face south whereas the original faced north. Site preparation should begin in April, 2021. – WW&F Facebook page.

Ashley, Pennsylvania
A small cadre of volunteers is working to restore Wanamie 9, which once operated on the narrow‐gauge Wanamie Colliery in Newport Township and previously at the Loomis Colliery, Hanover Township, both in Pennsylvania. Wanamie 9 was returned to the Wyoming Valley in June 2019, through a $17,000 purchase from Vierson Boiler Works in Grand Rapids, Michigan.
Wanamie 9 now sits on a small section of track in the Anthracite Miners’ Memorial Park in Ashley, Pennsylvania. Eventually, a pole barn shed will be erected to protect this locomotive.